One of the great blog posts of all time was from Daniel Davies, who declared — apropos of Iraq — that

Good ideas do not need lots of lies told about them in order to gain public acceptance.

It’s a good dictum; and if you see a lot of lies, or at least misdirection, being used to sell a policy you should be very, very concerned about said policy.

And the selling of TPP just keeps getting worse.

William Daley’s pro-TPP op-ed in today’s Times is just awful, on multiple levels. No acknowledgment that the real arguments are not about trade but about intellectual property and dispute settlement; on top of that a crude mercantilist claim that trade liberalization is good because it means more exports; some Dean Baker bait with numbers — $31 billion in trade surplus! All of 0.2 percent of GDP!

But what really annoyed me, even if it’s not necessarily the worst bit, was this:

But today, of the 40 largest economies, the United States ranks 39th in the share of our gross domestic product that comes from exports. This is because our products face very high barriers to entry overseas in the form of tariffs, quotas and outright discrimination.

Actually, no. We have a low export share because we’re a big country. Here’s population versus exports as a percentage of GDP for OECD countries: 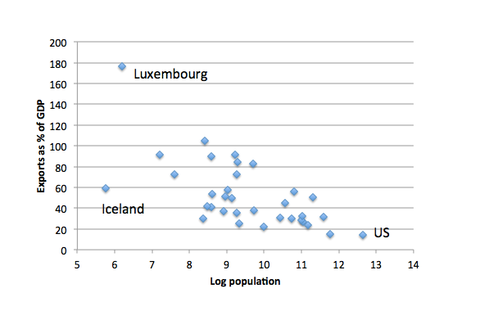 Population isn’t the only determinant — geography matters too, as the contrast between Luxembourg (in the middle of Europe) and Iceland shows. But claiming that the relatively low US export share says anything at all about trade barriers makes me want to bang my head against a wall.

If this is the best TPP advocates can come up with, this is not looking like a good idea.