An undercover investigation by BBC reporters into Chinese iPhone factories has found that workers are still being mistreated and that tin used in Apple Inc. gadgets could well come from dangerous illegal mines where children’s lives are put at risk.

For its “Panorama” documentary, which aired Thursday, the BBC says it “secretly filmed from inside the high-security Chinese factories where Apple’s products are made.” It sent three reporters undercover to iPhone facilities run by Pegatron Corp. 4938, -2.83% which had been recruiting thousands of staff from across the country to get ready for the launch of iPhone 6 and the holiday-sales rush.

Once inside, the reporters found exhausted employees falling asleep on the iPhone production line, after putting in shifts of up to 18 hours. 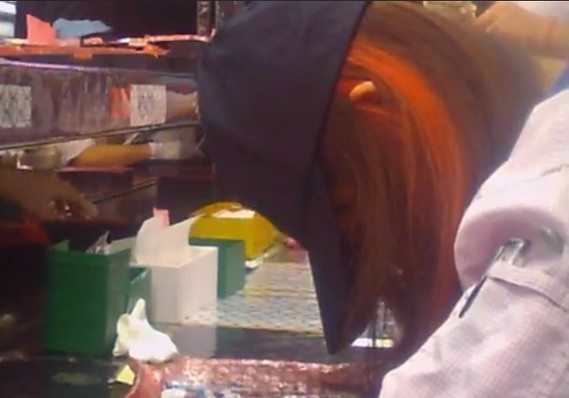 A worker struggles to stay awake.

“I am too tired, too sleepy. I can’t stand this any longer,” one worker says in the undercover video footage. There’s “virtually no one awake” in the iPhone testing area, the BBC team finds.

‘When staff fall asleep that way — again and again — that means the conditions of work are totally and physically intolerable.’ Ralph Nader

“When staff fall asleep that way — again and again — that means the conditions of work are totally and physically intolerable,” American political activist Ralph Nader comments during the program.

One BBC reporter was made to work for 18 days straight, even after having asked for time off, the according to the documentary.

Employees are supposed to have a choice about standing for long periods and about working nights. But the footage appears to show new recruits being told, when filling out a form, “Don’t tick the options which indicate you aren’t willing.”

And insiders at the Shanghai-area factory — who keep their faces hidden for fear of reprisals — are seen claiming that overtime is built into the work day as standard and that factory managers hold on to identity documents, restricting workers’ ability to move on. “I just want the customers to know Apple operates heartless factories,” an insider tells the BBC team in the documentary.

Apple has come under criticism over the years for exploitative labor conditions at Chinese suppliers. Allegations of mistreatment at Foxconn’s factories — where there was a series of suicides — led the iPhone maker in 2010 to vow to ensure its contractors provided fair working conditions. But the BBC documentary reports finding that promises of 60-hour work weeks and other protection guidelines had been broken.

The program takes the investigation further down the supply chain, looking into the source of tin used in Apple’s devices. It says it found evidence that tin from illegal digs in Indonesia is finding its way into iPhone components — and that children are putting their lives at risk to work in those open-cast mines.

At a typical pit in Bangka, Indonesia, people have died in mudslides, the BBC documentary reports having found. The mining process calls for jets of water to be shot at a pit’s walls to uncover the ore, bringing the danger of a collapse. Families make up some teams, so children can be digging in the pit with this risk in mind. “My feelings? I’m worried. Worried about landslides,” a 14-year-old whose name is given as Waheed tells a reporter. 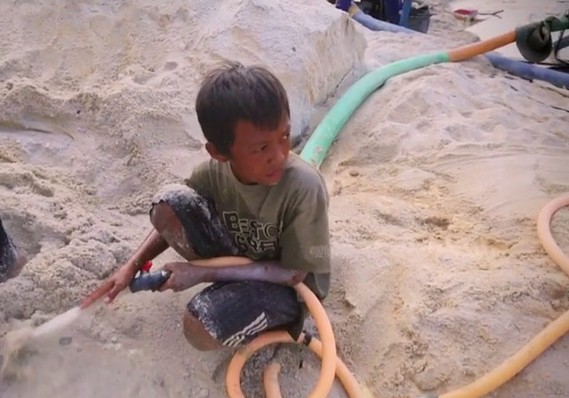 The BBC documentary reports a finding of children working in a tin mine in Indonesia.

Despite Apple’s stance on responsible sourcing of minerals, the environmental impact on remote Bangka island and the ocean around Indonesia is being felt. Acres of forest have been ripped away to get to the tin ore, according to the BBC program, while coral reefs are dying as a result of dredging for the mineral.

‘We work with suppliers to address shortfalls, and we see continuous and significant improvement, but we know our work is never done.’ Apple statement on working conditions at Asian suppliers, as reported by the Guardian

The documentary’s claims echo findings in a September report by two U.S.-based nonprofit organizations, which alleged industrial waste from Chinese plants supplying Apple was ending up in a river in Jiangsu Province. That joint report from Green America and China Labor Watch also alleged some employees at the Catcher Technology Co.–run factory were made to put in overtime of up to 100 hours a month, including working on their feet for more than 10 hours a day.

Apple and Pegatron had not responded to a request for comment at the time of writing. But Apple said, “We are aware of no other company doing as much as Apple to ensure fair and safe working conditions,” the Guardian reported. “We work with suppliers to address shortfalls, and we see continuous and significant improvement, but we know our work is never done.”