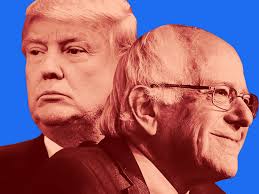 There were, in retrospect, clear signs of what was to come—signs that if Donald Trump and Bernie Sanders did not appear on the scene, someone else like them would have. We’ve had decades of forewarnings as the top income earners —the “one percent”—began taking bigger shares of our economy starting in the 1980s: The anti-globalization protests of the late 1990s. The rise of Ross “NAFTA-will-suck-our-jobs-away” Perot and Pat “Pitchforks” Buchanan against the GOP establishment. The brief but intense Occupy Wall Street movement. The adoration of Elizabeth Warren. The warnings from superstar economist Thomas Piketty in recent years that the United States was suffering the worst income inequality in the developed world, worse than anything since the 1920s—and that it was not sustainable.

Above all, there was the drip-drip-drip social acid of stagnating middle-class income—interrupted by the false dawn of the mid-2000s mortgage mania, when the poor felt rich but in truth were only more indebted—and the simultaneous self-isolation of our increasingly uber-wealthy class over three long decades. All without any effective policy response from Washington to redress the widening income gap.

On the contrary, from Washington there was only the all-too-self-confident movement of both political parties toward a full-on embrace of policies that further promoted the brutally unequal society that America is today. First, the Republicans became ardent free traders, then the Democrats under Clinton, with Obama following suit. Even the Democrats—having become deficit-slashing “Eisenhower Republicans,” in Bill Clinton’s tart phrase—responded with mostly harsh trickle-down medicine: “Workfare.” Unfair tax policies, with capital-gains earners (read: plutocrats) getting most of the breaks. Rubinomics. Greenspan worship. And all the while we in the media listened—in hushed awe of their genius—to the economists who told us that of course there were inequities and a lot of people would be left behind, but globalization and ever-freer markets were still good for most of us, overall anyway, sort of, we think. … And besides, what’s the alternative?

The only wonder, perhaps, is that it took Trump and Sanders this long to get here.

True, both men may fail in their respective insurgencies against the establishment. After his weekend thumping in South Carolina and facing long odds on Super Tuesday, Sanders could fade quickly as a candidate. Trump, meanwhile, still faces a sharp backlash from Republicans, some of whom are already saying publicly they can’t support him as their party’s nominee. But make no mistake: The message that Sanders and Trump are bringing to the stump isn’t going away soon, not until the two parties acknowledge the deep flaws in the economic paradigm that got us to this place of inequality, but which neither the Democratic nor the Republican leadership have questioned deeply.

Trump and Sanders are thus in many ways the yin and yang of America’s present discontent; both address, in different ways, the seething sense of unfairness, of inequality in Americans. Their supporters tend to be angry, somewhat less educated, more-industrial-age-than-information-age-skilled Americans—and in other cases, insecure young people just out of college, for whom unemployment until the age of 30 still averages 12 percent—who believe their political parties no longer represent them. Trump emphasizes shutting down job-stealing immigrants and getting “better” deals from the world; Sanders, imprisoning wealth-gobbling, spoiled Wall Streeters and getting “fairer” deals from the world. Both candidates plainly appeal to people who feel that no one is really standing up for them and what used to be known as their middle class; people who want more of the pie than they’ve been getting for a long time, and people who realize that their political parties are at best half-hearted about doing anything about that.

For some economists out of the mainstream, like Harvard’s Dani Rodrik, who issued one of the earliest warnings against the idea of the free-market-as-panacea in his book Has Globalization Gone Too Far? nearly two decades ago, this merciless crushing of the middle class at the hands of a mere economic theory has been a “slowly growing cancer” that has gone untreated by politicians. Today, he says, the Trump-Sanders phenomenon is plainly the long-awaited political reckoning for 30 years of errant policy and too-facile belief in the wonders of markets: the wild-talking building magnate on the right and the wild-haired socialist on the left have met up at the same intersection, one bounded by the four corners of anti-globalization, anti-free-trade, anti-immigration and anti-Wall Street sentiment.

“I don’t want to sound like the economist who called 10 out of the last five recessions, but yes, this is the populist backlash that unremitting globalization has historically unleashed and I had warned about,” he says. “When mainstream politicians are unable to generate meaningful responses to inequality, social exclusion and insecurity, populists of various ilk gain ground.”

The United States, which once idealized itself as a classless society, has become more socio-economically stratified than the aristocratic “old Europe” of the pre-World War I period, says Piketty. Much of this is the unintended consequence of untrammeled globalization, which has enriched the masters of capital, especially at the expense of blue-collar labor. In the global system, investment capital moves at blinding speed, while labor still must go by boat, train and plane—and that’s if it’s lucky, since immigration restrictions are much harsher than they used to be. All this helps to explain why U.S. labor is at the mercy of vicious competition abroad and Wall Street has the whip hand over corporate performance; why the gap between executive and worker pay has widened to record levels; why even incompetent executives enjoy golden parachutes while high-performing employees can be laid off without explanation or apology.

Above all, globalization has disrupted our national narrative in profound ways, says Rodrik. “The sense that we’re all in this together as one nation, a common society and a common policy, has been disrupted by globalization. Now, there is a greater realization that the benefits of globalization accrued disproportionately to the professional classes, the higher skilled, the ones who had the mobility and access to capital.”

Nothing underlined this divergence of fortunes between rich and poor more than the Big Crash of ’08, which caused a calamitous drop in Americans’ median net worth. According to the Federal Reserve, a broad group of Americans loosely defined as the middle class saw its net worth plummet from a median of $126,400 in 2007 to $77,300 in 2010. Thus we came out the other side of the Great Recession a very different economy altogether. “The recovered wealth—most of it from higher stock prices—has flowed mainly to richer Americans,” The Associated Press reported. According to Berkeley economist Emmanuel Saez, the wealthiest 1 percent of the country actually made out better, in percentage terms, during Obama’s “recovery” than they did from 2002-07 under George W. Bush.

By 2012, according to Saez, the top 1 percent were earning 23 percent of the nation’s income, almost the same ratio as in 1929. “My guess is that was one of the last straws that led to Trump and Sanders, but things had been building for a while,” says Frank Levy, an economist at the Massachusetts Institute of Technology who co-authored a much-cited 2007 paper concluding that labor began losing the fight to capital and Wall Street in the late 1970s, leading to greater inequality than in the days of what Levy calls the “Treaty of Detroit”—a consensus that supported high minimum wages, progressive taxation and other New Deal policies.

Cue Bernie and Donald, both of whom convey a message that Americans have every right to be angry about a rigged, big-money-corrupted economic system. According to a recent Reuters/Ipsos poll, nearly three-quarters of voters likely to head to the polls in November’s election say they think the United States is on the wrong track, and these disaffected people make up a majority of the base for both Trump and Sanders—87 percent and 54 percent, respectively.

Both Democratic and Republican leaders, meanwhile, are still kidding themselves that their respective bases are … basically OK with their economic agendas, when plainly the numbers show they aren’t. On the GOP side, there were those who thought the tea party was libertarian, but nothing could have been further from the truth, as Rand Paul discovered when his presidential bid crashed and burned. Even a conservative in the maltreated middle class doesn’t want less help from government; instead the tea party backlash was anti-immigrant and anti-Obama—not so much opposed to government per se as to how government redistributes wealth. The Democratic establishment from Obama to Hillary Clinton has been continually surprised by the anger and sense of betrayal within its progressive wing, which is why so few people took Sanders seriously at first (including the Clintons)

Thus what we have now is an emerging ideology with no party to speak for it. Among those claiming vindication is Pat Buchanan, who told the Washington Post recently that the “revolution” he predicted (the pitchforks in other words) was finally at hand: “What’s different today is that the returns are in, the results are known. Everyone sees clearly now the de-industrialization of America, the cost in blood and treasure from decade-long wars in Afghanistan and Iraq, and the pervasive presence of illegal immigrants.”

We can debate the causes of inequality; and certainly whether Sanders and Trump have any real solutions or are just making empty promises. What is not debatable is that growing inequality is a major, society-shaking problem—one that, as Rodrik says, has actually made America less cohesive, and neither Democrats nor Republicans are doing much about it. Here too we’ve had years of warning: Real wages for most U.S. workers have been relatively stagnant since the 1970s, while those for the top 1 percent have increased 156 percent, and those for the top 0.1 percent have increased 362 percent, according to a report by the Economic Policy Institute. Thus, the Harvard Gazette reported earlier in February, the poorest 20 percent of Americans received just 3.6 percent of the national income in 2014, down from 5.7 percent in 1974. The upper 20 percent, meanwhile, received nearly half of U.S. income in 2014, up from about 40 percent in 1974, according to Census Bureau statistics.