Skip to content
MEMBERS
JOIN
DONATE
Editor’s note: CPA member Eric Nelson appears in this CNBC news clip stating that the administration is right to challenge bad trade deals and change US trade policy. As farmers figure out how to absorb the shocks of global trade disputes, they’re not taking out their frustration on President Donald Trump. Since May, Trump’s approval rating among rural voters has remained intact or improved, according to Morning Consult polling data exclusive to CNBC.

The plight of the American farmer has been well-documented as the White House pursues aggressive trade policies. Certain export markets in Canada, Mexico, Europe and China have dried up or become more expensive due to retaliation to Trump’s aggressive moves. Prices for crops like soybeans have dropped, threatening profits as harvest approaches. Meanwhile, the U.S. Department of Agriculture is preparing to send $12 billion to soften the blow.

But voters in states feeling the squeeze of the trade war still think highly of Trump. Brent Bible, managing partner of Indiana’s Stillwater Farms, said farmers in his community have compartmentalized a fear for their business versus their overall support for the platform carried out by Trump.

“He might be failing in algebra, but he’s getting an A in geography and a B in science,” Bible said, analogizing various parts of the Trump agenda. “So the student overall is a B minus.”

“You don’t forfeit your right to disagree, just because you’re a supporter,” Bible added.

The overall support provides something of a safety net for Trump’s “America First” agenda, as he studies brazen new tariff packages and plays hardball with trading partners. But, as Agriculture Secretary Sonny Perdue pointed out, harvest season, which runs August through October, may prove to be an inflection point for farmers.

“Emotionally, they’ve been part of his base on trade, labor, regulation — those kinds of things,” Perdue told CNBC. “They have those values that [Trump] espouses, but the financial reality hits when that crop’s coming off.”

The financial reality has caused many farmers to make tough business decisions already.

Mike Beard runs Meadowlane Farms, a 2,000-acre property where he farms soybeans and corn and raises pigs in Frankfort, Indiana. He estimates he has already lost $15,000 this year due to the drop in corn prices.

“The recovery for a $15,000 loss means that I won’t buy one piece of equipment this year,” Beard said. Despite the market impact, “I don’t believe it’s shaken my support [for Trump]. I supported the need for the change in how we do business with other countries.”

Eric Nelson, who grows grain and soybeans, raises cattle and sells seed in Moville, Iowa, said farmers may have to change their crop mix based on price outlook, but they won’t be changing their political allegiances.

“Sure it’s worrisome for all of us; our livelihood depends on it,” Nelson said of the uncertainty of the trade negotiations. “But to say that all trade has been great the last 20 years, the facts would belie that.” 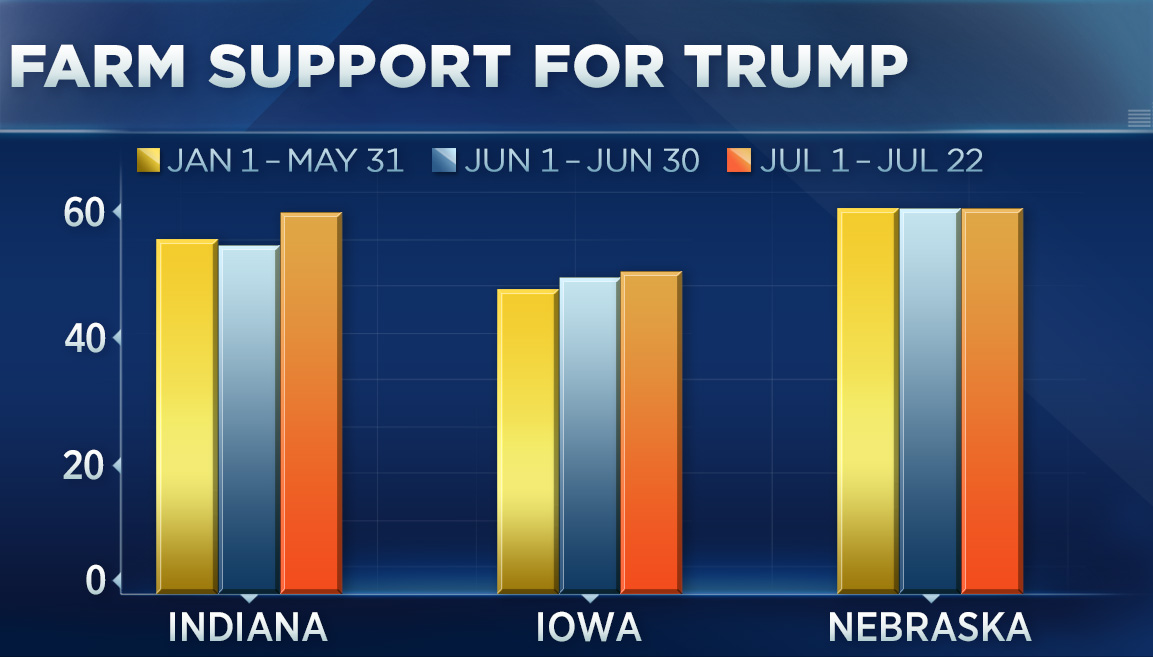 Approval for Trump has strengthened among rural voters in Iowa, Morning Consult survey data show, despite the slump in the price of soybeans, of which Iowa produces the most in the country. From January to May, 48 percent of self-identified rural voters approved of the job Trump was doing, which improved to 50 percent and 51 percent in June and July, respectively, as the trade war heated up.

Indiana displayed a similar trend. Some 56 percent of rural voters approved of Trump between January and May; on July 22, that number stood at 60 percent.

Of the 19 agriculture-heavy states surveyed by Morning Consult for CNBC, 10 showed Trump’s approval rating rising during the sample period of Jan. 1 through July 22. In seven states, it remained stagnant. And in one, Idaho, it showed support eroding from 64 percent to 59 percent.

The sample size included 197,923 self-identified rural voters. The margin of error for the national survey was plus or minus 1 percentage point, but it varies by state.

For the time being, the trade landscape still looks somewhat cloudy. The White House will impose a new round of tariffs on $16 billion in Chinese goods Aug. 23. Meanwhile, administration officials acknowledge an agreement with Europe to create new export markets will take months, if not years, to implement.

In the meantime, the Department of Agriculture will begin dispersing its $12 billion aid package around Sept. 4 to help recoup losses and stabilize markets. Most agricultural interest groups have supported the Trump administration’s recognition that retaliation is hurting farm businesses but have pushed for longer-term clarity.

Individual voters may speak out about trade at town halls and social media, but they are giving the White House time.

“I’m a firm believer that, if you’re in a bad deal with a trading partner, you owe it to yourself to step up and try to make it better for both parties,” said Nelson, the Iowa farmer. “I think that is what this administration is attempting to do.”