Why reshoring and near-shoring are better for the environment in the near-term.

Globalization is an environmental headwind.

If climate change risks are going to be measured in most policy decisions made in the Biden Administration, then the environmental impact of transoceanic shipping should be part of the equation.

Both the US and Europe now say climate change is one of the biggest dangers. Both are moving to reduce the carbon footprints of their economies. Europe is pressing ahead with regulating the shipping industry in order to get them to reduce C02 emissions 40% by 2030. The pressure to reduce shipping greenhouse gas emissions can be exemplified by the so-called Poseidon Principles, a framework by banks for assessing the climate risk for major shipping fleets. On January 1, 2020, the International Maritime Organization reduced limits on sulphur in fuel oil, claiming this is delivering a 70% cut in total sulphur oxide emissions from shipping. The industry knows they are being watched closely by the greens in government, and at the European banks that are increasingly ESG focused.

Global supply chains are like global pollution chains. According to one estimate, it takes 10 gallons of fuel to move one container from China to the US, and the annual total of about 10 million containers adds up to 100 million gallons of dirty fuel burned to bring Chinese imports to the US.

On top of that, US produced manufactured goods are cleaner than Chinese-made goods. So clean, environmentally healthy production will increasingly be local production. Locally produced goods will be less carbon intensive than importing, even if the ships doing the importing are the most economical way to get things from one country to the next. 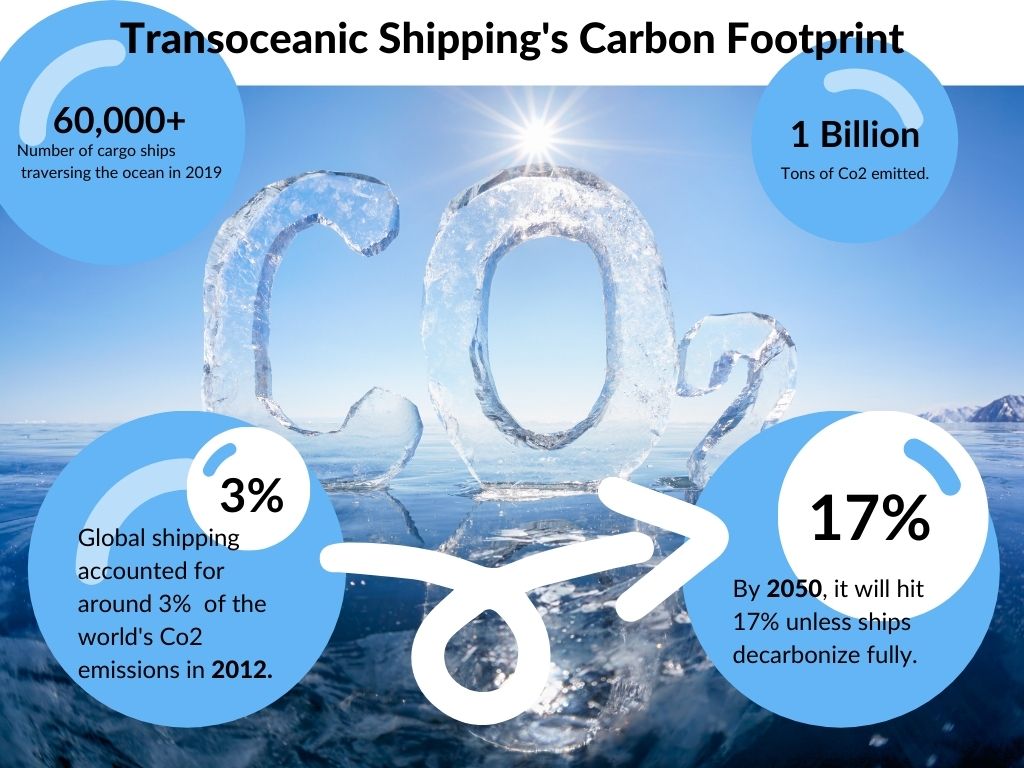 Where it makes sense, the simplest way is to devise economic policies focused on reshoring critical items in the supply chains by adding climate damage to the decision-making process.

This should win over those who have joined the Washington and global consensus that climate change is the biggest generational problem we face. This is environmental skin in the game. It doesn’t punish the American worker. Instead, it gives them more opportunities as local production replaces foreign production.

To the extent policy makers believe in the economic risks of climate change, producing more goods close to the point of consumption is an attractive argument for environmental economics.

American natural gas fracking companies can’t just dump fracked wastewater down the river. Kitchen cabinets made in Alabama from US forested wood has less mileage than wood going to China to be turned into cabinets and then shipped here to be assembled, and then shipped to Home Depots across the country. It may be cheaper, but is it helping the climate change issue today?

Over 60,000 ships traversed the oceans last year to deliver cargo to the world’s ports. Their C02 emissions accounted for roughly 3% of global carbon dioxide output, roughly the same as air travel. The World Economic Forum says if the shipping industry were a nation, it would be the sixth largest polluter in the world.

The industry knows tougher regulations are coming. They are trying to get up to speed with LNG, hydrogen or battery powered ships. This is many years away. It requires massive capital expenditure by private enterprise.

Maersk, the world’s largest container shipping company, pledged to become fully carbon neutral by 2050 and has invested $1 billion since 2014 in energy efficient technologies. Some of them, like carbon capture, are still in their prototype phase and may never make it to scale.

Still, the company’s head of sustainability, John Kornerup, told CNN Business in 2019 that Maersk will reduce its C02 emissions by 60% by 2030. They are running trials with different fuels and also developing electric batteries. Decarbonization of the shipping industry requires “a completely new propulsion technology,” Kornerup said.

It is a huge undertaking. Even with all of its financial muscle, Maersk will never go to “net zero” unless everyone goes net zero, and their executives know it.

Ships transport 90% of all goods in world trade. As poorer countries get richer, maritime shipping is expected to grow based off their demand for goods.

In October, the International Maritime Organization and 30 nations failed to agree to targets that would meet the Paris Agreement. They have missed all targets so far. To meet the Paris Agreement goal to reduce global temperatures by 1.5 degrees Celsius, shipping would have to cut their carbon output by an estimated 350 million ton; a reduction of nearly 75% in a decade.

It is tough to predict the future, but the future they are predicting requires the complete remaking of the maritime vessel engine room.

If only some ships are “decarbonized”, then a less ambitious 15% reduction means the transoceanic shipping industry pumps out around 850 million tons of carbon dioxide into the air, assuming such calculations are correct. EV Boats Not an Option, But ‘Localism’ Is

By 2030, to get to a 41% reduction would require a blended strategy for shippers, whereas 68% of the blend is still LNG and oil.

There are some small commercial ferry routes in Denmark that use boats powered by batteries, going short distances. The largest ferry has a battery with a capacity of just 5 MWh and it weighs 65 tons.

According to a study conducted by Ricardo Strategic Consulting for the World Shipping Council and other shipping clients in October 2019, pure battery electric merchant marine ship would require an energy storage system of at least 15 gigawatt hours to complete a single transoceanic crossing. Using current battery cell technology would require a battery array of tens of thousands of tons, ultimately limiting the vessel’s cargo carrying capacity. Currently, the largest battery array installation for boats has an energy storage capacity of only 129 megawatt hours.

Meanwhile, for the climate change policy makers here who are only thinking globally, they might have to consider taxes and tariffs on goods coming from China or southeast Asia as Europe is now considering with its carbon border charge if they want to force similar environmental polices on Asia.

None of the 10 largest, international container shippers (of which none are American) will like a US move to reshore. It would take some cargo out of circulation by reducing demand by the world’s biggest importer. Companies will lobby Congress to make sure the shipping industry is not blacklisted as bad for the environment, and subject to higher costs or policy-induced demand curbs. However, right now the shipping industry is sending all its empty containers to China, leaving US agricultural goods stranded at west coast ports, so it’s not clear that the US government should give them much consideration.

If the US commits to reshoring as a matter of environmental concern for some critical items – be it essential medication from Ireland or rare earth minerals mined in the Congo by Chinese companies – it will be politically challenging. The growing demand for transoceanic shipping will remain. It will likely be met by other countries, or replaced by increases in other imports, meaning the C02 problem doesn’t go away.

Globalization and global supply chains look much worse than they did 20 years ago when scarcely anybody was concerned about climate change. Some prefer to call it the Global Value Chain. But an alternative name – just as fitting — might be Global Pollution Chains or Global Warming Chains. The combination of transoceanic shipping coupled with the outsourcing of polluting industries to Asia is a headwind for all climate policy makers. Building closer to the consumer has always been considered a solution by the old school green activists who are now populating DC. A reduced reliance on faraway supply chains is good for the environment. As a double win, it creates domestic manufacturing jobs as they replace imports with domestically sourced goods.

Should the Renaissance in American Manufacturing be a Top-Down or Bottom-Up Approach? Perhaps the Answer is Both
April 25, 2022

Janet Yellen Seems to be Rethinking Globalization, Too
April 19, 2022
Go to Top