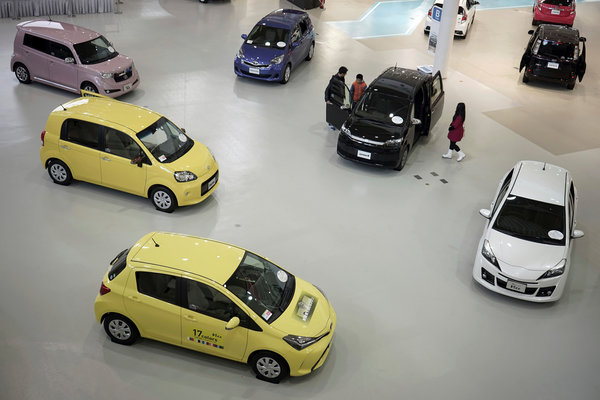 TOKYO — Buoyed by a growing American car market and the most favorable exchange rates in decades, Toyota Motor is closing in on its most profitable year ever, the automaker’s latest earnings report suggested on Wednesday.

The Japanese company, which is the largest-volume car producer in the world by a narrow margin — it made a few thousand more vehicles than Volkswagen last year — retains a larger lead when it comes to profit. It has led the global auto industry for as long as many car owners have been driving, barring an ugly stumble during the global financial crisis several years ago.

Through the third quarter of its business year, which ends in March, Toyota will have earned a net profit of 1.727 trillion yen, or roughly $14.7 billion, it said in the report. That is 8.6 percent more than in the same nine-month period a year earlier, and enough for the company to raise its net profit forecast for the year to ¥2.13 trillion from ¥2 trillion.

For the quarter ended in December, Toyota’s net profit rose 8.4 percent to ¥600 billion, a bigger gain than analysts had forecast. Industry experts surveyed by Bloomberg had expected, on average, a profit of ¥549 billion.

Last month Toyota projected that total sales volume at all its group companies — including the minicar subsidiary Daihatsu and the commercial truck arm Hino — would decline 1 percent in 2015, to 10.15 million vehicles.

Toyota is also one of a number of automakers caught up in a global recall of faulty airbags made by Takata, a Japanese supplier. Its smaller Japanese rival Honda last week cut its profit forecast for the year by more than $400 million because of mounting costs to repair cars containing potentially deadly airbag defects.

Toyota appears to have escaped the sort of financial damage incurred by Honda, however, owing to its larger size and smaller reliance on Takata products. Koki Konishi, a Toyota managing director, said a group of 10 affected automakers was narrowing a list of candidates to lead a joint industrywide investigation of the safety problem.

For now, Toyota is enjoying a golden moment. A big reason is the yen: Its value in foreign exchange markets has plummeted as Japan’s central bank has furiously created money in an effort to fight deflation and stimulate the economy. That has allowed Toyota to earn more money on each vehicle it sells outside Japan, once that money is converted back to yen.

A dollar, for instance, buys about 50 percent more yen today than it did at the Japanese currency’s peak in mid-2011, a time when the yen was unusually expensive by historical standards. Adjusted for long-term changes in prices and trade patterns, the yen is now cheaper than it has been at any time since the early 1970s, economists calculate. That has caused some in the United States car industry to complain that Toyota and other Japanese carmakers are enjoying an unfair advantage.

“For automakers, the key factors are volume, exchange rates and fixed costs,” said Masahiro Akita, an industry analyst at Credit Suisse. “If you can get all of those things to go your way, you’re in good shape. And Toyota has.”

Any car company with a presence in the United States is liable to be doing well right now, though, regardless of the currency in which it ultimately reports its profit. A steadily recovering economy, combined with a recent plunge in gas prices, is lifting sales industrywide. Some analysts are predicting that total sales in the United States could surpass 17 million vehicles this year, for the first time since the crisis.

Between rising sales and a favorable exchange rate, Toyota earned ¥457 billion in pretax operating profit in North America in the first three quarters, almost 50 percent more than it did a year earlier.

Toyota has also been cutting costs — a response to the pain it endured when the yen rose rapidly during the financial crisis, leading to the first loss for the company since the 1950s. “Cost improvements” added ¥200 billion to its pretax operating profit, only slightly less than the benefit from the currency swing, it said.