Advanced Micro Devices revived its fortunes through the deal, and sparked a national-security battle

Advanced Micro Devices Inc. AMD 3.92% transformed itself from a financially struggling company to an investor’s dream in just three years, a turnaround that began with a decision to help Chinese partners develop advanced computer-chip technology.

That deal may have helped save the company, but it alarmed U.S. national-security officials, who saw it as a threat to their goal to rein in China’s supercomputing industry. Last week, after years of friction, the Commerce Department issued an order that effectively barsseveral Chinese entities—including AMD’s partners—from obtaining American technology.

It looked as though the U.S. had succeeded in stanching the flow of cutting-edge computer technology to China. In reality, it was too late. Chinese versions of AMD chips already have been rolling off production lines. That technology is helping China in its race with the U.S. to build the first next-generation supercomputer—an essential tool for advanced civilian and military applications.

AMD’s Chinese partner, a military contractor, already used those chips to build what may prove to be the world’s fastest supercomputer, according to high-performance computing experts briefed on the project.

The partnership with the Santa Clara, Calif.-based chip maker was a game changer for China, which has long been unable to match the U.S.’s supercomputing power because of its inferior chips, one product the country has so far struggled to master. The AMD deal gave China access to state-of-the-art x86chips, which are made by only two companies in the world: AMD and Intel Corp. They are the most dominant processor technology in use today.

“It’s the keys to the kingdom,” said retired Brig. Gen. Robert Spalding, who served on the National Security Council in 2017 and 2018 and discussed strategies to stop the AMD deal with officials at other agencies. “Everything today is built on x86.”

AMD said in a written statement that it “has and will continue to comply with all U.S. laws,” and that the technology transferred to China in the deal wasn’t as high-performing as other U.S. products commercially available there at the time.

Commerce Department officials said last week’s action was made in consultation with other agencies. It followed weeks of inquiries by The Wall Street Journal about AMD’s Chinese partnership and the belief of some government officials that AMD had plotted a sophisticated end-run around regulators.

This account of the protracted battle over the deal between AMD and the government is based on interviews with more than a dozen current and former government officials familiar with AMD’s China deal, senior chip-industry executives, lawyers and company and government filings in the U.S. and China.

When Lisa Su was named AMD’s chief executive in October 2014, the company was desperate for cash, its debts were mounting and its revenue was declining. Its stock had dipped to around $3 a share. Some analysts predicted it would seek bankruptcy protection.

Three weeks after getting the top job, Ms. Su, a Taiwan-born New Yorker, jetted to Beijing to meet officials at China’s Ministry of Industry and Information Technology. A Chinese vice minister urged her to partner with China “to achieve mutual benefits based on AMD’s technological strength,” according to a ministry press release at the time.

“Making contributions to China’s national defense and security is the fundamental mission of Sugon,” its website read as recently as December 2016. Sugon also makes computers for civilian use.

In exchange, the Chinese government gave AMD a lifeline: $293 million in licensing fees plus royalties on the sales of any chips developed by the venture.

That April, AMD got another boost from Beijing. It said it would get a $371 million payout for selling an 85% stake in two of its semiconductor factories in China and Malaysia to an entity controlled by China Integrated Circuit Industry Investment Fund Co., a state-backed financier known as “the Big Fund.” Its mission is to develop China’s indigenous chip industry. 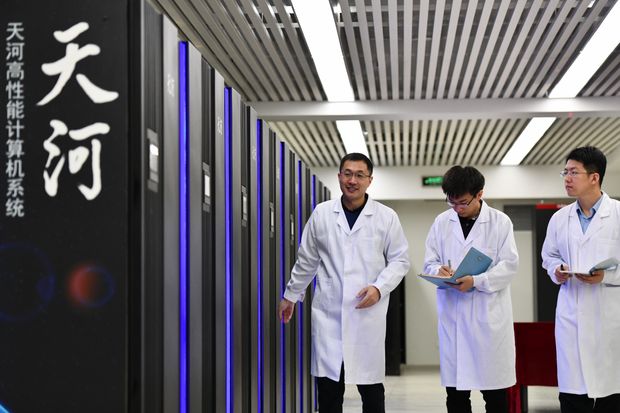 The U.S. and China are competing to develop the world’s first exascale computer, a next-generation supercomputer that would be capable of doing one quintillion—or one billion billion—calculations per second. While supercomputers are used in tasks such as weather forecasting and cancer research, they also are integral to the development of nuclear weapons, encryption, missile defense and other systems. The chips American companies produce to power supercomputers, including AMD’s x86, are superior to any China can make on its own.

“Semiconductors are a space where the U.S. still leads China and the rest of the world,“ says William Evanina, the U.S. government’s top counterintelligence official.

Shortly before AMD announced the Sugon deal, Defense Department officials learned of a presentation the joint-venture partners made in China talking up the deal’s potential to transform the country into a leader in processor technology.

Pentagon officials quickly began seeking ways to unwind the deal, according to people familiar with the matter. They questioned company representatives and repeatedly tried to get them to submit the deal to a review by the Committee on Foreign Investment in the U.S., or Cfius, according to those people.

Companies routinely seek approval from the committee for deals that raise national-security issues. The committee is led by the Treasury Department and includes the Defense, Commerce, Justice and Energy departments, among others. It can recommend that the president block foreign investments in U.S. assets for national-security reasons.

AMD didn’t submit the deal for committee review, arguing Cfius didn’t have jurisdiction to review that type of joint venture, according to people familiar with the matter. The company also claimed it wasn’t turning over any state-of-the-art technology. Pentagon officials found that response at odds with how the joint venture had portrayed itself in China.

Treasury officials, who have the final say on the consensus-driven Cfius panel, ultimately agreed with AMD’s assessment that the deal fell outside its remit. That left AMD and Defense officials at a stalemate through the end of the Obama administration and the first months of the Trump administration.

A Treasury spokesman declined to comment, as did the Defense Department.

Commerce Department officials also were investigating the deal for compliance with export controls. In June 2017, following a series of inquiries, they sent AMD an “is informed letter” that alerted the company they suspected the China deal violated export controls. AMD replied that it was complying with all regulations, according to people familiar with the matter.

In its statement to the Journal, AMD said that starting in 2015, it “diligently and proactively briefed the Department of Defense, the Department of Commerce and multiple other agencies within the U.S. government before these joint ventures were entered into, and we received no objections to their formation or the transfer of technology.”

Before the transfer of any technology, AMD said, the Commerce Department notified the company that it wasn’t restricted or otherwise prohibited from being transferred.

Current and former national-security officials said in interviews they believe AMD designed the deal’s complex structure, which involved the creation of two interlinked joint ventures, to sidestep U.S. regulations. AMD said the deal was structured for business and technological reasons and to comply with regulations, not to evade them.

AMD controls the first joint venture, which licenses the U.S. chip maker’s x86 intellectual property and manages production of the chips. The second venture, controlled by AMD’s Chinese partner, designs the devices that use the chips and sells the final products. 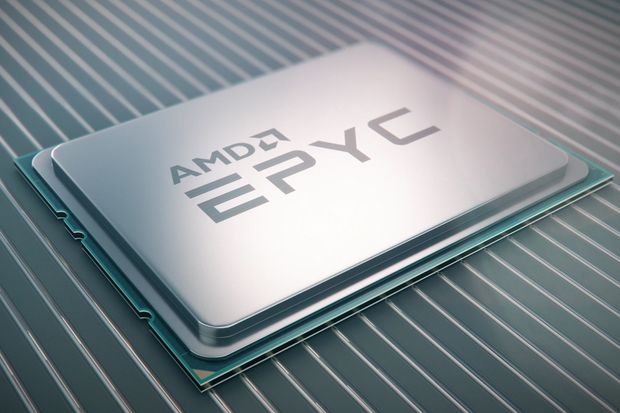 The arrangement enables AMD to share technology with China while retaining control over the entity working with its intellectual property. The creation of the second, China-controlled joint venture allowed the parties to claim that the resulting product was indigenously developed in China, a key goal of the Chinese government.

While Cfius has jurisdiction to review foreign purchases of U.S. chip assets, it doesn’t have clear authority to review overseas joint ventures that don’t grant a foreign entity control over a U.S. business.

AMD didn’t have to seek an export license from the Commerce Department because it stripped out the parts of its x86 chip that would have required licenses, such as encryption technology, which China didn’t need anyway.

The x86 chips under development for China, code-named Dhyana, are similar to AMD’s own EPYC chips, minus U.S. encryption technology that AMD omitted, say people familiar with the deal.

The joint venture’s U.S. managers stressed to employees that the Dhyana chip was being developed for commercial purposes, such as providing processing technology to Chinese tech giants such as Baidu Inc. or Tencent Holdings Ltd. , according to one of the people familiar with the deal.

Sun Ninghui, head of the computing-technology institute at the Chinese Academy of Sciences, which works closely with Sugon, likened its chip development strategy to what China did with high-speed trains—introduce a foreign technology to the market, absorb it, and then innovate to make China a leader.

“This gradually advances our ability to comprehend their core technologies,” Mr. Sun told a government-run newspaper. “That way, we no longer can be pulled around by our noses.”

By mid-2017, concerns about AMD’s China deal had reached the Trump White House. Retired Gen. Spalding, who left the National Security Council last year, said of AMD: “They’re using the letter of the law to violate the spirit of the law.”

There was heavy opposition from many companies and trade organizations, which feared Cfius interfering in their overseas activities, and the provision didn’t make it into the final version of the legislation that passed in August 2018.

Defense Department officials decided to unilaterally submit AMD’s Sugon deal to Cfius for review, despite Treasury’s earlier interpretation that it fell outside the panel’s jurisdiction. Only rarely in Cfius’s 44-year history has the committee been asked to review deals without the cooperation of either party involved, according to lawyers who track the confidential cases.

On June 21, however, the Commerce Department announced the new export restrictions banning Sugon and its affiliates on the AMD deal from accessing U.S. technology without a license. The move, which followed the imposition of similar export restrictions last month targeting Chinese telecommunications giant Huawei Technologies Co., effectively forces AMD to unwind the deal.

In its decision, the Commerce Department said the Chinese entities were determined “to be acting contrary to the national security or foreign policy interests of the U.S.” It added: “Sugon has publicly acknowledged a variety of military end uses and end users of its high-performance computers.”

In a statement on its WeChat account, Sugon said the decision would severely disrupt its cooperation with U.S. partners. It said it had complied with all U.S. laws and would seek to discuss the issue with U.S. officials. “We believe there is a large gap in the understanding of Sugon’s corporate circumstances on the part of relevant U.S. authorities,” it said.

The Commerce action will make it hard for China to make future generations of the x86 chip, and it’s unclear if AMD’s partners will be able to continue producing the current version without the U.S. company’s technical assistance, according to experts in semiconductor technology. But China gained significant technical know-how through the deal, which has already yielded chips currently powering supercomputers.

For AMD, pushing back against U.S. national-security officials while its China partnership gained traction paid off. The chip maker used the cash infusion to get back on its feet and has since introduced an array of competitive new products.

The company’s stock price has risen to around $30 per share recently, from under $2 in early 2016. AMD’s shares were the S&P 500 index’s top performers last year, rising nearly 80%.

—Yang Jie in Beijing contributed to this article.