A decision by Congress to extend the Export-Import Bank only temporarily is raising concern among business owners who say they rely on the credit agency to lower the risks of exporting.

Congress extended the agency’s charter through the middle of next year as part of a compromise between supporters of the agency and those who want to eliminate it. Generally, lawmakers reauthorize the export-credit agency for multiple years at a time.

At Shank’s Veterinary Equipment Inc. in Milledgeville, Ill., Jennifer Dettman, the secretary and treasurer, said she relies on the Export-Import Bank to offer open credit for 60 days. Exports comprise about 30% of the company’s over $900,000 in yearly sales.

Shank’s, which has seven employees, manufactures surgery tables for large animals, and sells its equipment to universities, zoos and private clinics in countries such as Mexico and India. It started using the bank’s credit-insurance policy in 2011. 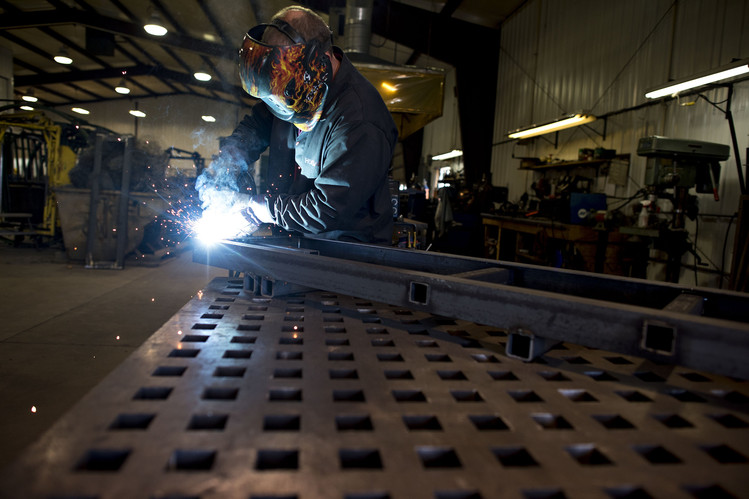 A welder works on a large tabletop at Shank’s Veterinary Equipment in Milledgeville, Ill. Daniel Acker

When a customer orders a Shank’s table, typically priced at $20,000 to $30,000, the business spends roughly two months manufacturing it. The Ex-Im Bank will insure the order for a fee equal to 0.5% of the shipment value—a fee that Shank’s generally passes on to its customers. If the customer defaults, then after 90 days Shank’s can submit a claim to the bank, which covers 95% of Shank’s loss.

“It minimizes the risk for us,” said Ms. Dettman, describing it as “pretty good coverage.”

She concedes there may be similar insurance coverage available in the private marketplace, but isn’t sure whether those policies will cost more. “I would have to start all over again,” she added.

Similar conversations are happening at other businesses. Ralph Imholte, the president and CEO of Bepex International LLC in Minneapolis, said the bank’s working-capital guarantee program has helped expand his company’s exports to more than 50% of the company’s $25 million in annual sales. Mr. Imholte said he is “very worried” about the bank’s future, because “without that guarantee, it would limit the size of the projects we could undertake and limit our growth potential.” Bepex provides equipment and assistance to food and chemical businesses.

“Many small businesses and many jobs are dependent on the bank’s programs. It’s an area that needs less political fighting and more policy discussion,” Mr. Imholte said.

Those concerns haven’t swayed House Financial Services Chairman Jeb Hensarling (R., Texas), who has led the charge to close the Ex-Im Bank. Congress creates uncertainty any time it considers changing the law, he said, and there are more substantive things lawmakers could do to help businesses.

The push from some conservative Republicans to close the bank is part of a broader political debate about the role that government should play in the economy. Critics say the agency represents a form of corporate welfare that interferes with private markets. They also question its role in helping small businesses, arguing that major firms such as Boeing Co. and General Electric Co. receive a significant amount of its financing. Only 19% of the agency’s direct support to firms in the 2013 fiscal year, measured by dollar volume, went to small businesses, for instance.

Supporters note that major U.S. trading partners similarly seek to aid their exporters, and contend that the agency fills a need not met by private insurers and banks. They also point out that the agency helps reduce the federal government’s deficit. The agency said earlier this month it had sent $675 million to the Treasury Department in fiscal 2014. The extension passed by Congress lasts through June 30.

For now, supporters are pushing for a longer-term reauthorization. Two key members of the House Financial Services Committee last week unveiled bipartisan legislation that would extend the bank’s charter for five years while bolstering risk and fraud protections. The measure, from Reps. Maxine Waters (D., Calif.) and Gary Miller (R., Calif.), would, among other things, require the bank to allocate 50% of its net earnings each year to create a reserve fund to cover potential losses.

Congress needs to provide more certainty to firms, said Mr. Miller. “It is in our national interest to help American companies secure sales around the world by making sure they aren’t undercut by aggressive foreign-export credit agencies,” he said.

Small businesses, meanwhile, don’t know if they can rely on the bank for assistance over the long term.

Mrs. Dettman, who said she consults local export-assistance programs for guidance, also is unsure whether a regular bank would be willing to work with Shank’s, which makes just a dozen or so foreign shipments a year.

“We’re really limited in terms of who will work with us,” she said.