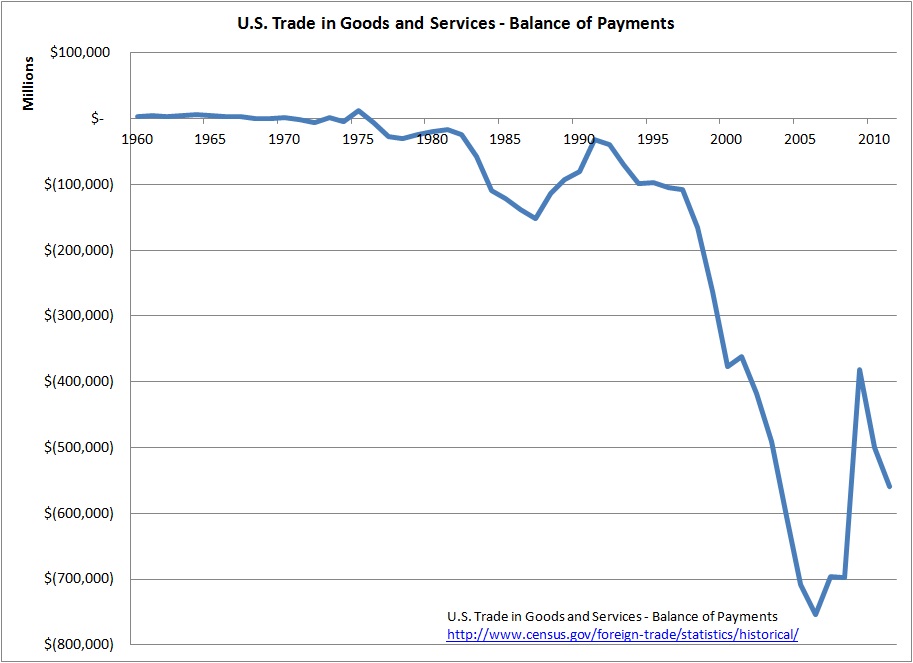 We all know how NAFTA turned out for us (for most of us, anyway). We all know how opening up trade with China turned out. It’s right in front of our faces. Who hasn’t seen the boarded-up downtowns of closed-down “factory towns?” Who hasn’t felt the fear of hearing, “We’re moving your job to China”? We all know what has happened to jobs, wages, factories, and the ability to buy things that are “made in America.”

But instead of saying “Oh my God, sorry, let’s see if we can fix this and bring back the jobs and factories and get wages back up,” our DC elites are instead pushing for even more of these job-killing, factory-closing trade deals. No wonder the pubic thinks that the government works against the interests of most of us. When it comes to these “trade” deals, the public is exactly right.

Trade deals like NAFTA, and China have led to a massive, continuing trade deficit. That means we buy stuff from them, but they don’t buy stuff from us. So, our jobs and money drain away. It’s as simple as that. The trade deficit — $470 billion in 2013, around $500 billion for 2014 — is a direct measure of jobs, wages, factories, prosperity, and our future draining out of our country. Imagine if $500 billion of new orders came in every year to businesses that make and do things inside the US. Imagine the job creation, wage increases, and economic boom we would experience.

How do we avoid this happening again?

Here are a couple of simple questions to ask about any new trade bills:

1) “Are they committing to buy from us as much as they sell to us?” If the answer is “no” — or even just unclear — then why in the world would we be interested? That’s not a “deal,” and that’s not “trade.” Yet, almost every “trade deal” we have signed so far has resulted in other countries selling far more to us than they buy from us, draining jobs, wages, and prosperity from our country.

2) “Why should Congress pre-approve a trade agreement before we get a chance to read and fully analyze it?” This question is about a process called “Fast Track” — whereby Congress agrees to essentially pre-approve trade deals even before reading them. With Fast Track Congress agrees to pass the trade deal within 90 days of first seeing it, with no changes allowed. Obviously, this sets up a rigged process, in which the big corporations are able to launch into a full-scale PR campaign to apply maximum pressure. The intention is to keep the public from having a chance to analyze the consequences of signing the deal, and rallying opposition. The inability to make any changes makes everything about whether Congress will “kill the whole hard-negotiated deal” instead of being about what is actually in the deal.

It’s Coming At Us Very Soon

One of the biggest things coming down the road in DC is trade legislation. The administration has been negotiating the Trans-Pacific Partnership (TPP), and wants to have an “accomplishment” on their record. They feel they can find “common ground” with Republicans to push this through (most Democrats oppose.) Meanwhile the giant multinational corporations have been preparing a huge PR campaign to help push it through. The corporate money is flowing, the lobbyists are salivating, the corporate-aligned politicians are standing with their hands out.

Take a look at this chart of the “trade deficit” and notice that the timeline matches up with the ever-increasing economic pressure your family and your community have been feeling for some time. If you don’t like the way these past trade deals have turned out, then you aren’t going to like the way the next round turns out at all.

Call your Senators and member of Congress and ask these questions. Tell your member of Congress not to vote for “Fast Track” approval of trade deals — or at the very least to wait until the deal has been made public and the public has had a chance to analyze it before they vote on Fast Track.