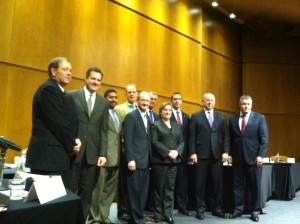 Dayton, OH —  Michael Stumo, CEO of the Coalition for a Prosperous America, was the featured speaker at a forum held by Rep. Mike Turner (R-OH) in Dayton today.  The event was titled “Forum on Trade and Tax Policies With China and the Impact on Manufacturing in the Dayton Region,” and was held at Sinclair College.

Rep. Turner highlighted the problem of Ohio job and economic loss stemming from the U.S. trade deficit, the role of China’s economic cheating, and his work on foreign currency issues and stronger trade law enforcement.

“Our trade deficit is not only an important problem, but a core economic problem,” said Michael Stumo.  “If we balanced trade, we would eliminate the $600 billion per year that is leaving our economy.  We would create millions of jobs, drastically increase economic growth, and collect substantially more tax revenue to largely fix the fiscal problems.”